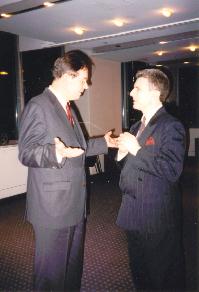 About twenty years ago, Michael Shestov devised his first teaching system that allowed military telegraphists to reach the required professional skills within 7 days instead of the expected 4 months. The system had a 95 percent success rate, comparing to the 40 to 50 percent success rate of the previous system. Shestov subsequently discovered how to practically apply the newly formulated principles of his system to Morse code, native and foreign language improvement, speed reading, short and longhand writing, sign language, and other areas — all of which amazingly had the same success rate as the original system he developed for telegraphists.

Supreme Learning™ system can be applied to any area of human activities or skills that involves movement. Supreme Learning™ has an extraordinary power to improve precision in areas that require virtually error-free performance, thus significantly reducing the risk of bodily or material injuries, as well as financial losses. Success of Supreme Learning™ method is based on two things: exercises that are designed and developed specifically for the adult brain, and ergonomically correct movements that quickly generate new brain cell connections — consequently, providing higher quality and more stable performance, as well as significantly shortening the learning curve.

The main difference between Supreme Learning™ and the traditional — as well as, ostensibly, accelerated — teaching methods is that Supreme Learning™ works for both “fast” learners and “slow” learners (including students with learning disabilities). Supreme Learning™can be applied to children and adults of all levels of ability, from beginners all the way to the most advanced — the system’s specialty being adults who are seemingly “stuck” at whatever level they are currently.

Michael Shestov & The Ambassador of Argentina in the US, Mr. Diego Ramiro Guelar

Just one example: in 1993 Shestov was designated as the world’s fastest, most efficient multi-lingual instructor by the Divo book of records, human achievements, and phenomena, after spending only 7.5 hours (20 times faster than any other known instructor would have taken), to teach 80 children in Denmark how to type and spell in Danish perfectly. This was particularly noteworthy since Danish was not Shestov’s native language (he was born in Russia).

Supreme Learning™ was subsequently officially endorsed by the Danish minister of education as the “best on earth”.