When he was a young man, Michael Shestov decided to teach himself to type. He wasn’t satisfied just to type like most people, having to go back and fix errors. He was determined to learn to type error-free — without making any mistakes at all!

He studied the process of how people learn and discovered some universal principles that were previously unknown. He developed a method of learning that broke traditional barriers. Using his own method, Michael Shestov became the fastest and most accurate typist in the world — not just in his native language, but he also broke world records in many other languages including English!

TypeRIGHTing™ is The Amazing Typing Tutor Created by the World’s Fastest Error-Free Typist.

Don’t compare SupremeLearning™ English to “Mavis Beacon Teaches Typing”™! The typewriting software included in our course – the amazing TypeRIGHTing™ program – is the only program that won’t let you get away with errors.

One might expect such a program to cost hundreds, or even thousands, of dollars. But, you can get TypeRIGHTing™ right now for only $19.95. To order TypeRIGHTing™ for this unbelievably low price, please click here. 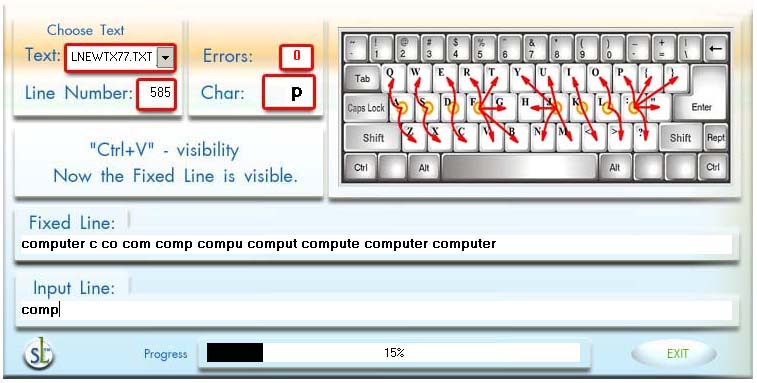 TypeRIGHTing™ Works because It Is Based on Powerful Principles.

TypeRIGHTing™ is simple to use. It is perfect for beginners — even young children. The program doesn’t seem to be very complex and it is easy to use. However, it is built on such powerful principles of learning that people who use the TypeRIGHTing™ program will soon learn to type without errors, even though they don’t understand how it works.

“I couldn’t do that two hours ago!” exclaimed one startled student who had just completed a whole page of error-free typing for the first time in his life.

“How does it work?” asked a perplexed student whose error rate had dramatically disappeared. “It seems too simple to get results like that!”

“Practice doesn’t make perfect,” says Shestov, who also used the same principles to teach himself to be a master pianist and karate expert. “Only perfect practice makes perfect.” This is as close as he gets to giving away the secrets of his learning system. But, it doesn’t take a genius to figure out that less-than-perfect practice is not desirable.

Most people learn to type (and most other skills) with TypeWRONGing methods. Instead of learning how to do things right the first time, they learn to backspace and correct what they did wrong. Instead of eliminating errors — they count errors and correct them and go on as if there were no errors.

TypeRIGHTing™ teaches you to do it right the first time. Instead of counting errors, you learn to eliminate errors. But, you don’t just learn it mentally. TypeRIGHTing™ doesn’t accept, “Oh, I knew that but I just didn’t do that…”

TypeRIGHTing™ trains your muscles and nerves, along with your brain, to do it right the first time. One mistake and you have to start over. Just like a video game, you have to do it perfectly or you’re dead.

Whether your goal is to type better, type faster, type more accurately, or to do anything else more perfectly, you will be more successful using the TypeRIGHTing™ method than any TypeWRONGing method.

One might expect such a program to cost hundreds, or even thousands, of dollars. But, you can get TypeRIGHTing™ right now for only $19.95. To order TypeRIGHTing™ for this unbelievably low price, please click here.

“When you pronounce it right and then type it right letter-by-letter you become extremely proficient at any language (including its spoken and written forms) virtually in no time. You become more intelligent as your brain evolves and gets upgraded. SupremeLearning plus TypeRIGHTing™ upgrades your brain!”
Mr. Shestov’s breakthrough methods of training people to how to learn have been implemented in the SupremeLearning programs that teach people to read, write, and speak foreign languages. He has personally used them to make himself fluent in many languages, including American English”.

“The only way to drastically/dramatically improve your language (e.g., English) skills is to say it right and type it right. No amount of wrong typing or monotonous saying things out loud will ever help your brain develop. You need to train your brain. Keep it in good shape.”
The greatest joy in life for Mr. Shestov is to help others improve their lives by learning. He has spent countless hours improving his unique methods of education and working out ways to get their benefits to the people who need them most. This has included thousands of hours of personally teaching foreigners to speak American English, training other teachers to use the SupremeLearning methods, and creating correspondence courses for those he cannot teach personally”.

For anybody who cares about learning to type correctly, the TypeRIGHTing™ program is priceless. In the modern computerized world, with information processing at break-neck speeds, and the market demand for proficient data processors, writers, editors, and secretaries, this training is worth more than money — it is a basic key to success.

“It is more important to get TypeRIGHTing™ to the people who need it than to make a lot of money from selling it. I want it to be affordable to people with children, people who don’t have a lot of money, and people who need this training in order to improve their lives. Price it low, but don’t give it away because people don’t appreciate anything that is free.”