FROM RAGS TO RICHES 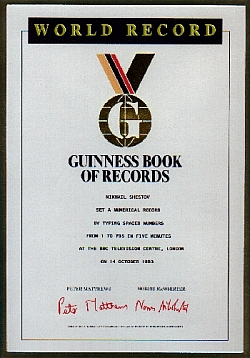 Today, Michael Shestov is a renowned speaker and an international celebrity in the field of adult education and study of foreign languages. According to ITAR-TASS (Russian Governmental News Agency), he utilizes his brain at 92% (for comparison, an average individual utilizes one’s brain at 5 – 10%). What made Michael famous back in the nineties was his ability to type and edit texts faster than anybody else in the world – in 27 languages! His first Guinness World Recordwas set in 1990. Since then Michael has done dozens of demonstrations of his unique technique for reporters, experts, politicians and college professors all over the world (to name a few, CNN, BBC, and the co-founder of the Guinness Book of Records, Norris McWhirter).

But he wasn’t always a celebrity!

In fact, when Michael was in college he had problems memorizing material. He was a mediocre student, tagging along with other slow learners. He spent a lot of time studying but somehow, knowledge just didn’t stick. Michael tried tutors and different recommended learning techniques, only to find himself more and more frustrated. But he was stubborn. Shestov was determined to find a way that would allow him to learn and memorize things as fast as his fellow students. Little did he know that he would soon leave many of them far behind.

Using his experience as a classical pianist and a typist in the military, Shestov came up with a new learning method that used a combination of muscle memory and vocalizing. That was an ‘Aha!’ moment for Michael. Suddenly, learning became easy. Thanks to his new technique, he was able to make a leap from a struggling student to a world champion and a sought-after expert in a matter of a two years. At age 25, Shestov became an assistant to the Minister of Special and Professional Education.

But Shestov didn’t stop there. Even though he could type and edit texts faster than anybody else on the planet he knew that he still had an accent. His next step was to figure out how to use his technique for accent reduction.

Everybody knows that losing an accent for an adult is a major challenge, and that most people simply give up. But not Michael.

Just like with his previous endeavor, Michael didn’t stop till he came up with a solution. It took a while but eventually he discovered that when he took a foreign phrase, slowed it down and then mimicked it slowly, with exaggerated movements of his mouth, repeated it like that and only then sped it up to normal, he was able to sound just like a native speaker. Another “Aha!” moment!

At first, his followers were skeptical. After all, going through this exercise did look a little hokey. But after Michael was able to teach hundreds of people to speak English almost accent-free, his success became official (and his services sought after by members of Russian Oil-Gas club).

Today, Michael’s SupremeLearning Center in Moscow is one of the top ESL facilities in the city, and he is a welcome guest at many international educational events and conventions.